August 10, 2019
WARNING!  Yes, this book has cute cartoon characters on the cover.  But inside are depictions of violence, body horror, torture, very awkward sex, gunfire, and references to Guy Fieri*.

IF YOU BUY THIS BOOK FOR YOUR CHILDREN, YOU ARE A TERRIBLE PARENT.
Tyler Fairfax can't seem to catch a break.

A human living in the toon district of Animætropolis, the only affordable neighborhood in San Jose, he's been surviving on the kindness of strangers, his badger neighbors, and his boyfriend while he looks for a job. An unexpected encounter with a toon from the black-and-white days gets him exactly what he needs and then some.

But Tyler's problems aren't over yet; a stranger informs him people have been going missing around this toon and his live-in talent agent, and to keep an eye out for anything suspicious. Tyler’s curiosity gets the better of him; he learns what happened to at least one of those people...and now it's happened to him.

He is turned into Fairfax Fawkes, a toon fox with a human mind and perception; everything a toon would be able to shrug off, he feels as if he were still human. Worse still, indulging his toon instincts erases a human trait or, potentially, a memory.

As he traces a web of lies, drugs, human trafficking, and murder for hire, he has to work around his foil’s compulsion to impede his progress. Trapped between human sensibilities and toon guidelines, Fairfax has to break a lot of rules if he has any hope of surviving this.

It’s get wacky or get whacked.

*Yes, Guy Fieri does a tremendous amount of charity work and I have nothing but respect for the man, but hey... it's low-hanging fruit.

April 15, 2019
Good news everyone! I'll be at FanX Salt Lake Comic Convention 's Spring Event this coming Friday and Saturday (April 19-20, 2019). I'll be with the Bard's Tower and have copies of "The Art of Madness" (now bearing the symbol of its new publisher WordFire Inc & WordFire Press ) for sale. Hope to see you there!
Read more 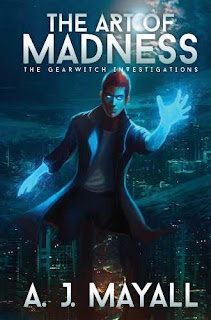 Ability to fly?  Check. Manipulate gravity?  Check. Alter the flow of time?  Check. Pay the bills on time...? Yeah, about that... Phoenix McGee became a detective to show the world he was mature, reliable, capable of running his own life and business. It’s just a shame he can’t adult his way out of a paper bag. On the verge of losing everything, he takes on a simple case of suspected adultery, something to keep the lights on and the creditors at bay. Little did he suspect his life would become a chaotic whirlwind of false leads, uneasy alliances, mob ties, and a woman who punches with a sedan. Bodies pile up as he struggles to keep things normal for himself and his assistant, Suzette DiMarco. In Rouge Mal, Nevada, unusual is normal. Being a haven for the supernatural and superpowered, it’s common to see a vampire on the street while a psychic informs you your bus will be late. Just present your Black Card for proof of powers. That’s not to say there are no normal people,
Read more